August 14th at 8:30AM we left a foggy Port Townsend, WA; our destination was San Francisco. Our captain joined us the night before (Captain Paul Hubble, whom I highly recommend). The departure ceremony was brief. Libations and a prayer were given to Neptune and the spirits of the four winds before cutting the ceremonial dock line and we were off.

Calm, still water soon turned into 4-6 foot seas coming straight at our bows. We spent the entire length of the Strait of Juan de Fuca bashing into the waves and wind. Ben did not fare well. He became quite friendly with a bucket and his cabin. Our ride smoothed out significantly once we turned south. I took the midnight to 3AM watch. Upon waking we were surfing down waves.

The morning of day 3 we reach Newport, OR where we stopped for two days. We were able to talk the Embarcadero Resort Marina into giving us an end tie. Rover was extremely grateful to be back on solid ground.

Our reason for stopping was twofold. One, Ben needed to get on solid ground and reset his system a little. Two, the engines weren’t charging the batteries and the generator stopped working. We pulled into Newport with 14% left on the batteries. We ended up staying there for two nights to wait out a storm south of Coos Bay.

While we were stopped I took the opportunity to get a refill on motion sickness patches. At this point I discovered the limitations of being in a spread-out, small town with only my feet for transportation. (Uber has spoiled me)

Newport is a nice little town with some nice little shops and a lot of loudly barking sea lions. One can only walk the same stretch of road so many times before you start to get a little stir-crazy. By the end of day two, I was ready to get back on the water.

The rest of the journey was fairly uneventful. There was not enough wind to fill the sails and there was a lot of fog. We were graced with the moon above us. Three days of motoring and a refueling stop in Crescent City and we were passing under the Golden Gate Bridge.

We plan on spending a few weeks in San Francisco to rest, restock and visit some friends.

Another big thank you to Captain Paul Hubble! 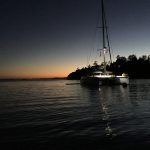