We are travelling from Santa Cruz, CA to Morro Bay, CA about 5-10 miles off-shore. We had a small stop off the Capitola Beach so we could get Pizza My Heart like I used to when I was a kid.

I am on watch from 3:30 until Caroline gets up sometime next week. The dog, using all of its ‘feel sorry for me’ skills, is in the bed with her rather than in his bed under ours.

I have a small boat about 5nm south of me that keeps appearing and disappearing from AIS. I have not yet seen him on radar.

I went outside to adjust our chart plotter and noted the fog was light with pretty good visibility. There is a full moon making the 1-2 foot swells shine. The odd thing was the random whitecaps that kept appearing half-way down the waves. I kept looking at them and then I dawned on me that the whitecaps were breathing! Dolphins! At least 2 dozen were racing, jumping and diving around the Waponi Woo.

You have not lived until you have seen and heard a show like that.

It was too dark to shoot a picture or video so here is a picture of the sunrise off one of the bows: 1 second after this picture a giant sea lion tried to photo bomb by leaping into the air in the shot. 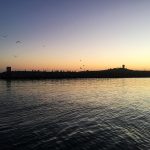 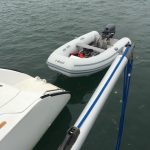